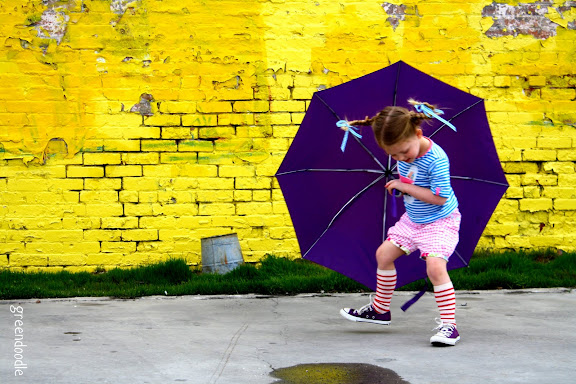 Way out at the end of a tiny little town was an old overgrown garden, and in the garden was an old house, and in the house lived Pippi Longstocking. Her father had bought the old house in the garden many years ago. He thought he would live there with Pippi when he grew old and couldn't sail the seas any longer. And then this annoying thing had to happen, that he was blown into the ocean, and while Pippi was waiting for him to come back she went straight home to Villa Villekulla. That was the name of the house. 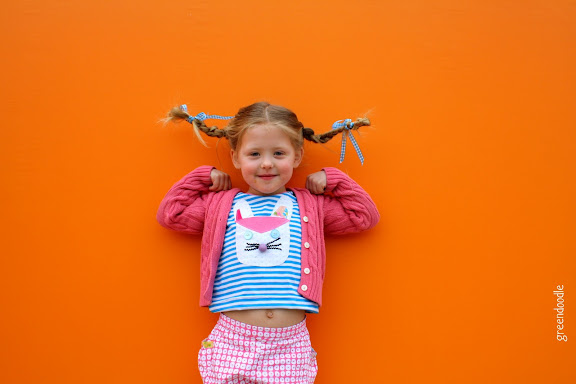 "A remarkable child," said one of the sailors as Pippi disappeared in the distance.
He was right. Pippi was indeed a remarkable child. The most remarkable thing about her was that she was so strong. She was so very strong that in the whole wide world there was not a single police officer as strong as she. Why, she could lift a whole horse if she wanted to! And she wanted to. 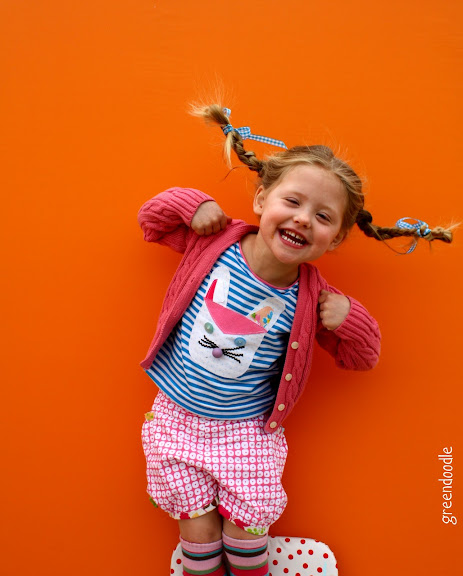 She was the most remarkable girl [you] had ever seen... This is the way she looked: 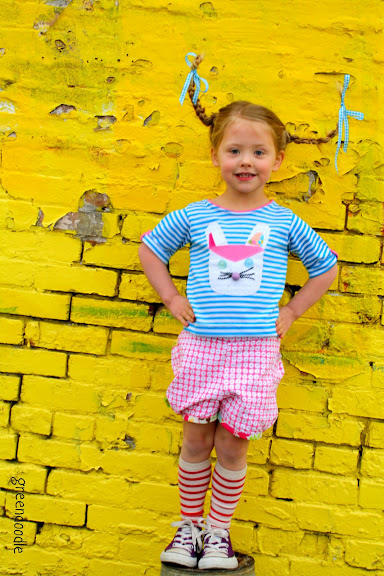 Her hair, the color of a carrot, was braided in two tight braids that stuck straight out. Her nose was the shape of a very small potato and was dotted all over with freckles. It must be admitted that the mouth under this nose was a very wide one, with strong white teeth. Her dress was rather unusual. Pippi herself had made it. She had meant it to be blue, but there wasn't quite enough blue cloth, so Pippi had sewed little red pieces on it here and there. On her long thin legs she wore a pair of long stockings, one brown and the other black, and she had on a pair of black shoes that were exactly twice as long as her feet. . .

I made these sweet little shorts by tinkering with a basic elastic waist pant. I took a few inches out in the front to create a flat front. The back has elastic at the waist. I lined the shorts in cotton batiste for strength. At the hem I gathered four inches at the outside of the leg, then finished the hem with bias tape. The side pockets are also gathered finished with bias trim. "Suppose you go home now," said Pippi, "so that you can come back tomorrow. Because if you don't go home you can't come back, and that would be a shame."

Email ThisBlogThis!Share to TwitterShare to FacebookShare to Pinterest
Labels: once upon a thread, sewing

Thank you for visiting, I'd love to hear what you think. Thank you from the bottom of my heart for taking a minute to share your thoughts. Your comments make my day!